DonBoy
Let me say publicly that DonBoy’s answer exudes a combination of intuitive genius and confidence that make me think DonBoy is going to do big things in his life. -- Steven D. Levitt (Freakonomics blog)
Wednesday, July 16, 2008

I Didn't Know it was Illegal

ORLANDO, Fla.—A restitution hearing is scheduled for Wednesday in Florida to determine how many investors were bilked -- and of how much money -- by convicted boy band architect Lou Pearlman.

Too Good to be True You Can't Trust Anyone Nowadays

Osama bin Laden's chief deputy in an audiotape Tuesday accused Shiite Iran of trying to discredit the Sunni al-Qaida terror network by spreading the conspiracy theory that Israel was behind the Sept. 11 attacks.
...
"The purpose of this lie is clear -- (to suggest) that there are no heroes among the Sunnis who can hurt America as no else did in history. Iranian media snapped up this lie and repeated it," he said.

Convincing un-math from a Slashdot poster!

I read one of Marilyn Vos Savant's books, and in it she listed 9 as a prime...

I test primeness by dividing the test-number by all integers, from 2 through the test-number's square root, looking for a zero remainder. So, first, I divided 9 by 2. I worked on this for a while, and ended up with a nonzero remainder. So far, 9 looks prime, and I've already tested half of the potential divisors! In fact, there's just one more potential divisor to try: the number 3. I'm almost done, and everything rides on this final calculation. There's a lot of uncertainty here.

So here we are, having tested half of the possible divisors, and so far 9 is looking prime and there's just one more divisor to test against. So, I ask you: do you want to bet 9's primeness/compositeness on this last calculation? I'll make it easier for you: I tell you right now, that 9 is just like 17, in that it is not divisible by 4. And then, I'll even give you an option: we can finish the calculation by dividing 9 by 3, or you can change your candidate divisor to 5, now that you know 4 doesn't work. Well.. what'll it be?

Here's a screen grab from a commercial for the current #1 movie, "21", about the MIT students who won a lot at blackjack. 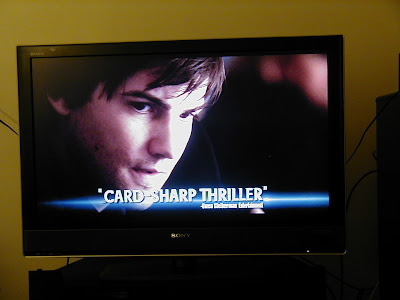 The voice-over confirms it: "Entertainment Weekly raves: 'A Card-Sharp Thriller!' "

That's true. The review is even fairly positive. But as you'd see at the link, "Card-Sharp Thriller" is -- obviously -- a purely descriptive term, like "War Movie!" Nevertheless, with the word "sharp" in there, it sure sounds like a compliment, doesn't it?

When Israel Was in Peep's Land Let My Peeps Go